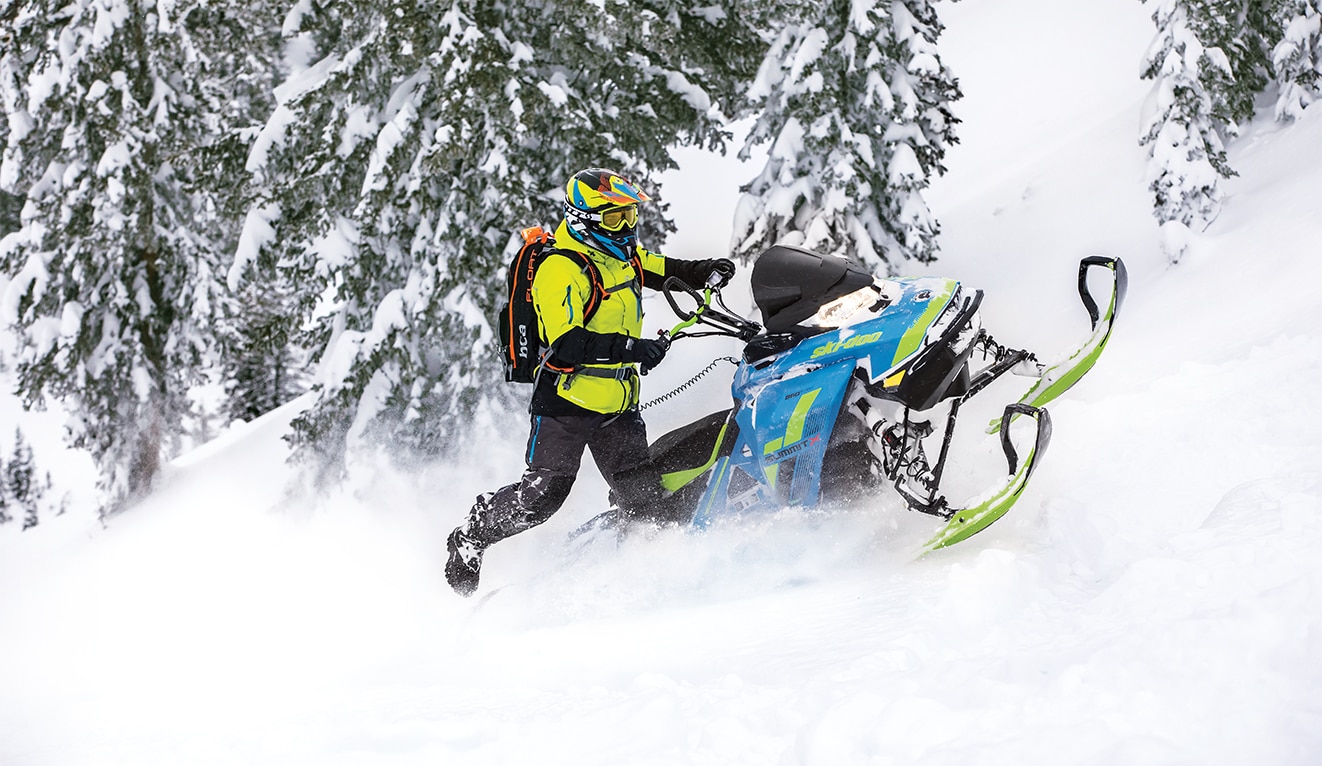 Like any marketing claim, all three of these characteristics are must be quantified to claim it on the label or advertise a garment in such a way. The Sympatex technology used in Ski-Doo snowmobile riding gear is one of many ways available to meet established industry standards. There is a log jam of good snowmobile riding gear that meets those standards, but great riding gear uses those industry-defined measuring sticks as a minimum starting point for product development. Great snowmobile riding gear goes above and beyond to create a garment that doesn’t just meet your needs, but aims to provide you with the very best overall riding experience.

How does Sympatex do that? Let’s break each characteristic down, starting with waterproof. The European standard for waterproofness (EN 343 Standard because Sympatex materials are developed in Germany) is that a material must hold 1,300mm of water pressure before it shows any moisture on the inside of the garment.

What does that mean? If we can equate water pressure to a relatable action, a 130-ish lb. rider kneeling on a wet surface (snow perhaps?) creates a water column pressure of about 13,000mm. Bad news if you bought your snowmobile riding gear from a company that sees industry standards as the goal rather than the starting point! No problem for owners of Sympatex gear that pass the water column pressure test at more than 45,000mm of pressure!

How? The use a water chamber called the EDGAR (Enhanced Dynamic Garment Rain Tester) system is used to test the clothing in continuous rain for up to 3 hours. But they don’t just test in a downpour, there are multiple chambers for testing against water intrusion from nearly any angle. Think riding during a march sleet storm, or the kind of rain that immediately freezes to your goggles. 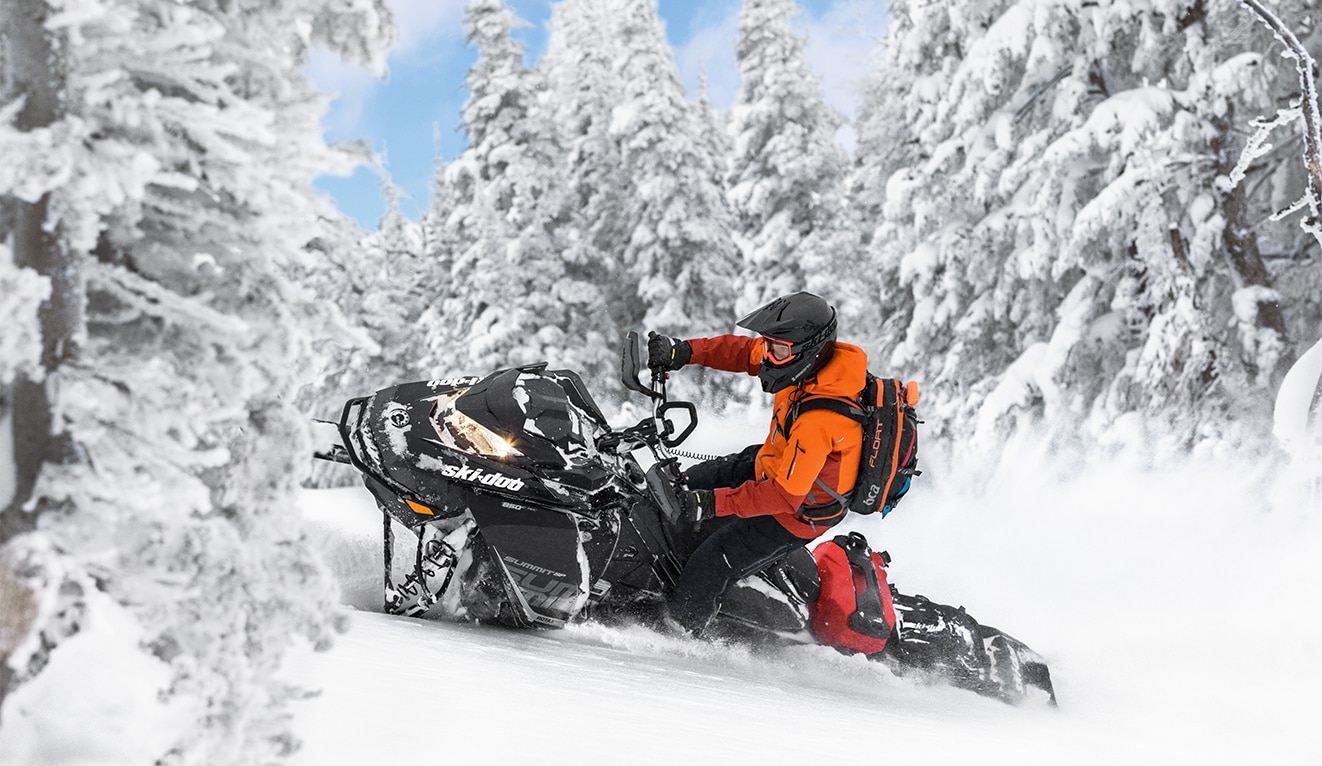 Further details on Sympatex waterproof testing can be found on the Sympatex website.

The breathability of today’s snowmobile riding gear is immensely important as active riding styles gain popularity. Most know that breathability refers to the movement of moisture (perspiration) from the inside of a garment to the outside. The million-dollar question is how can the same garment that is so highly waterproof on the outside allow moisture to pass through on the inside?

If you think back to your primary school science class, you’ll remember water can turn into a gas (water vapor). Sympatex membranes are considered non-porous material, so they keep water droplets out. However, the structure of the Sympatex membrane features hydrophilic molecule strains that promote the evaporation and movement of water vapor from the inside of the garment to the outside.

That’s a pretty scientific way of saying your Sympatex snowmobile jacket sort of acts like sponge for water vapor soaking it up away from your body, but instead of getting heavier moves it to the outside of the snowmobile jacket where it can continue to evaporate.

Again, there’s a standard way of measuring breathability. Snowmobile riding gear claiming breathability is usually subject to the Resistance Evaporative Transmission (RET) scale. It’s a numerical scale from 0-20+ with anything more than 20 considered unsatisfactory breathability, and anything less than 6 is considered very good breathability. Sympatex gear measures at 35 g/m²/24 hrs. Moisture Vapor Transmission Rate (MVTR), which rates at 0.5 on the RET scale. Simplified, that means Sympatex gear does a beyond exceptional job of moving bone-chilling water vapor away from your body.

Sympatex gear also measures at 100% windproof per DIN EN ISO 9237 standard which measures how much air passes through a garment. Zero liters of air per second pass through 1 m² of Sympatex membrane. That’s right, absolutely zero wind chill effect which as most of us know can make the perceived temperature feel colder than the actual temperature – and make for a miserable ride.

Combine all that great technology and testing with great style and design concepts from snowmobilers like you, and the only question that remains is, “Will it last?” Well, on top of all the rigorous testing we just outlined, Sympatex materials are poked, prodded, stretched, scratched, rubbed and twisted in any way imaginable. In fact, Sympatex gear can be stretched up to 300% and still keep all the important characteristics snowmobile gear needs! And your Ski-Doo Sympatex gear backs all this talk up with a lifetime warranty. The only thing left for you to worry about is the ride.