As the 2019-20 ISOC Snocross season officially crossed the midway point, the top Ski-Doo pro racers seemed to find another gear. In a season full of powerful performances, this past weekend may have been their most dominant to date.

The Team BOSS Racing Pro class tandem of Aki Pijlaha and Elias Ishoel led the way each notching a win – Pijlaha on Friday and Ishoel on Saturday. Not even a bout with food poisoning could keep Pihlaja from notching his second win of the season on Friday night. He took advantage of a clean start coming out of the opening left-hand turn charging hard to the front of the pack. With a wide open track in his sights, Pihlaja took full advantage leading from start to the checkers for the win.

Ishoel found himself in the LCQ for the first time this season on Friday night. He wouldn’t let his early evening struggles take anything away from him in the finals, turning in a second place run. Daniel Benham (Warnert Racing) continued his strong riding of late and made his way through the pack to complete the Friday night Ski-Doo podium sweep.

Saturday’s action had a similar look on the box when the snow dust finally settled. All three Ski-Doo riders found their way to the podium again – this time led by Ishoel. Emphasizing smooth lines over pure speed, Ishoel showed his maturity as the defending champion methodically worked his way to the front of the pack through the first couple of turns. Once in the lead, it was smooth sailing to the checkers.

Behind Ishoel, Benham narrowly avoided getting tangled with Lincoln Lemieux (Scheuring Speed Sports)  through the demanding rhythm section to put himself in podium position. With a second-place finish, he’s firmly affixed himself in the hunt for season points championship. Coming across in third was Pihlaja to complete the second Ski-Doo podium sweep of the weekend. Lemieux was able to remount after that hard get off and is ready to go for the next round.

In a matter of two days, the race for the Pro Lite points championship went from a one-man show to possibly the most contested class of the season. Francis Pelletier (Warnert Racing) came into the weekend trailing leader Hunter Patenaude (Scheuring Speed Sports) by 24 points.

By the time the weekend was over, Pelletier found himself atop the leaderboard by a narrow 4-point margin thanks to a win on Saturday and a solid all-around weekend in the heats. Patenaude did his best to battle through some lingering issues from a hard crash sustained in Deadwood the weekend before. No doubt, the upcoming break in the action will give him some needed recovery time as he remains right in the race to defend his points title from last season.

After 10 rounds of racing, Ski-Doo racers hold the top three spots in the chase for the overall Pro Lite points championship with just 11 points between them. Leading the way is Pelletier. He’s followed closely by Patenaude and Cameryn Anderson (Anderson Racing) had a second place finish on Friday and sits well within striking distance in third place overall. 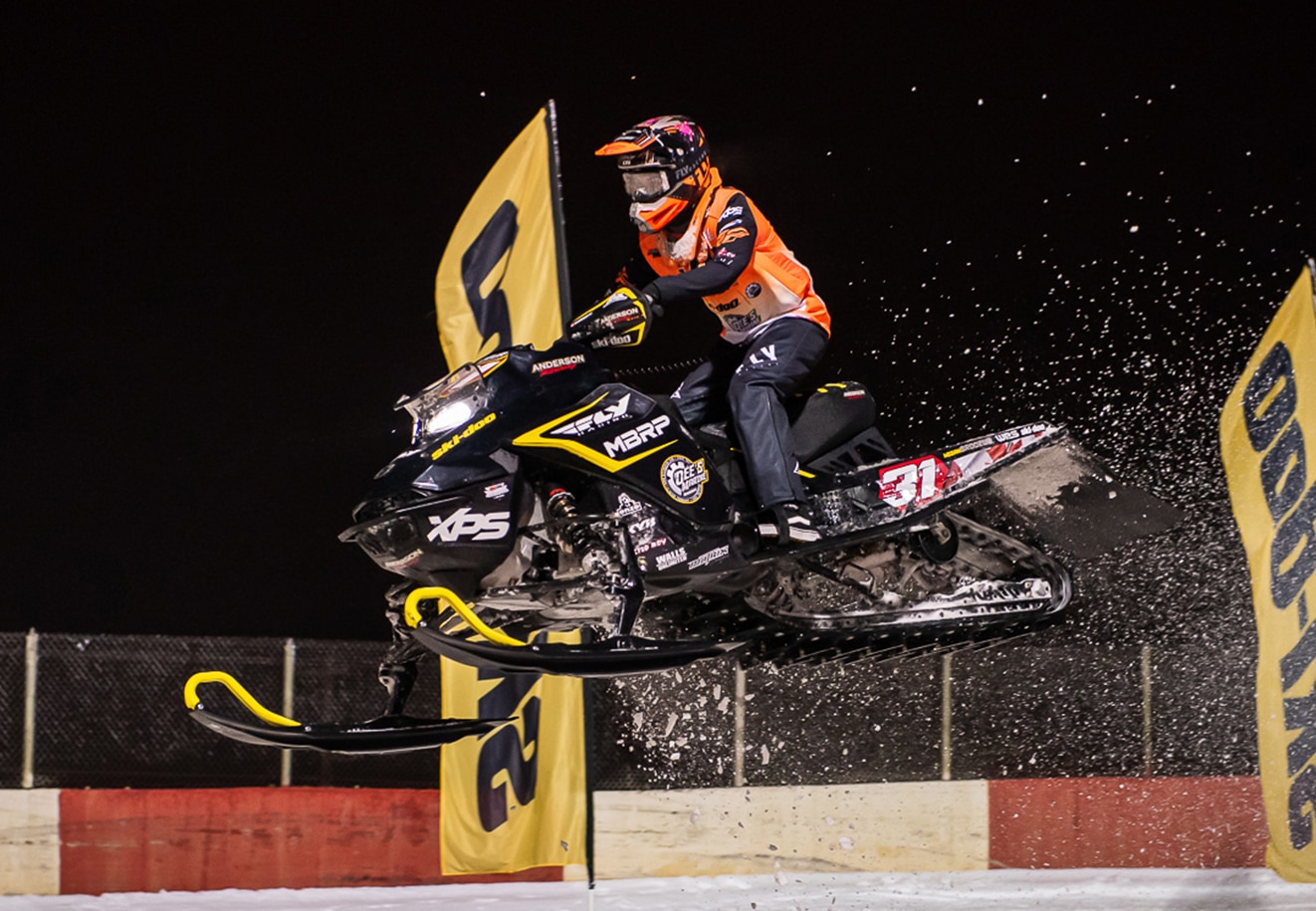 Friday night was pure domination by Brodeur from green flag to checkers, holding true to the form that’s seen her turn in one winning performance after another. Alissah Ashline got her weekend off to a strong start with a third place run in the finals.

Saturday was more of a challenge than Brodeur’s faced this season. After a mid-pack start, it wasn’t until the third lap of the six-lap final that she finally made her way to the front. Once there, she quickly established a gap on the field she wouldn’t relinquish and captured her 10th victory of the season. Malene Anderson found her way to the third step of the podium. Ashline followed up her third-place run with a fourth-place finish on Saturday to give the Ski-Doo Pro Women racers three of the top four spots on the day. 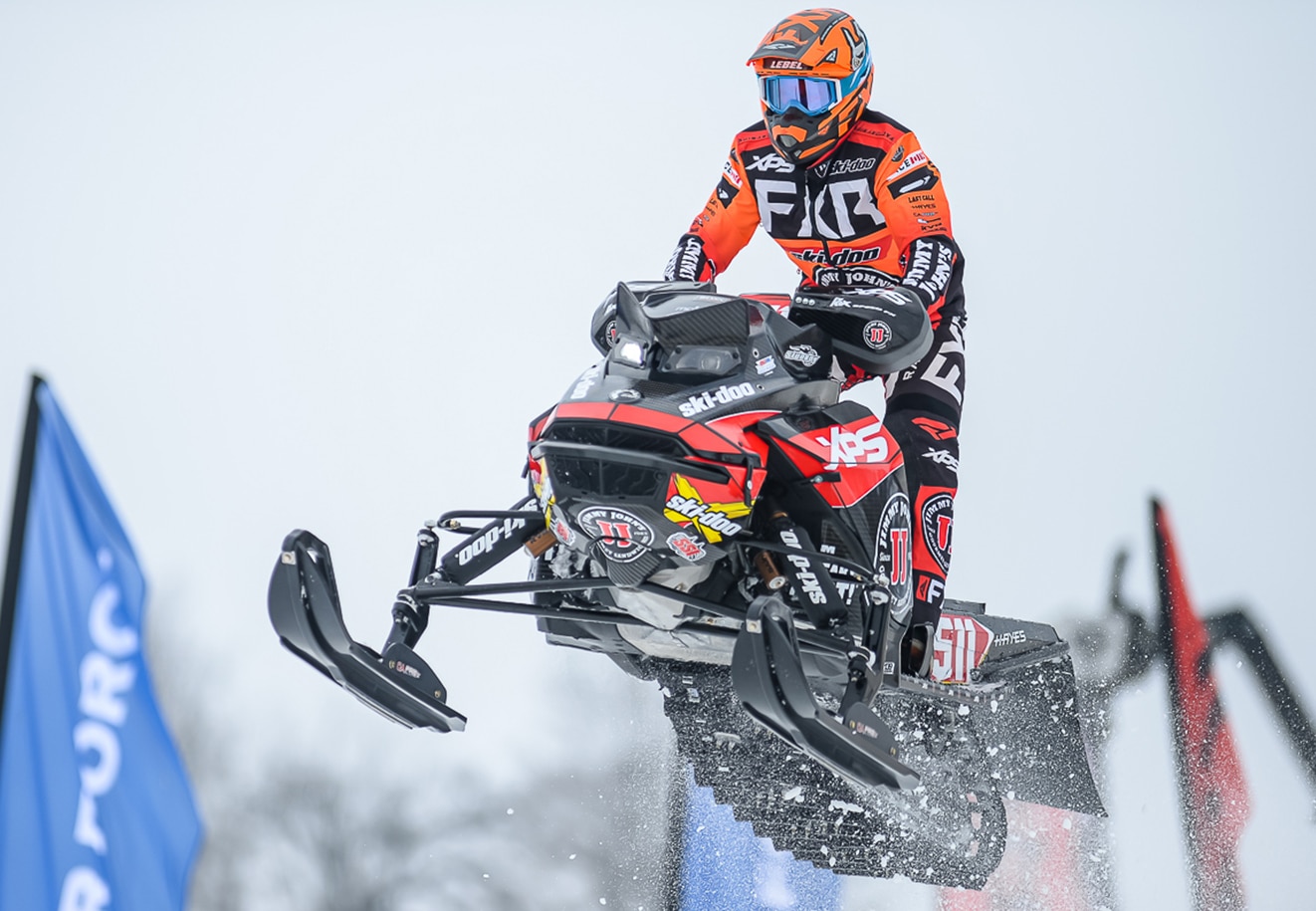 Jordan Lebel (BOSS Racing) doubled up on the weekend for wins No. 5 and 6 on the season in Sport Class. He currently holds a 37 point lead in the overall season points standings.

Drew Freeland followed up his second place run on Friday night with a wire-to-wire win in Saturday’s Sport Lite action. Emeric Legendre Perron finished second on Saturday. Perron would also take home two wins in the Jr. classes on the weekend as well.