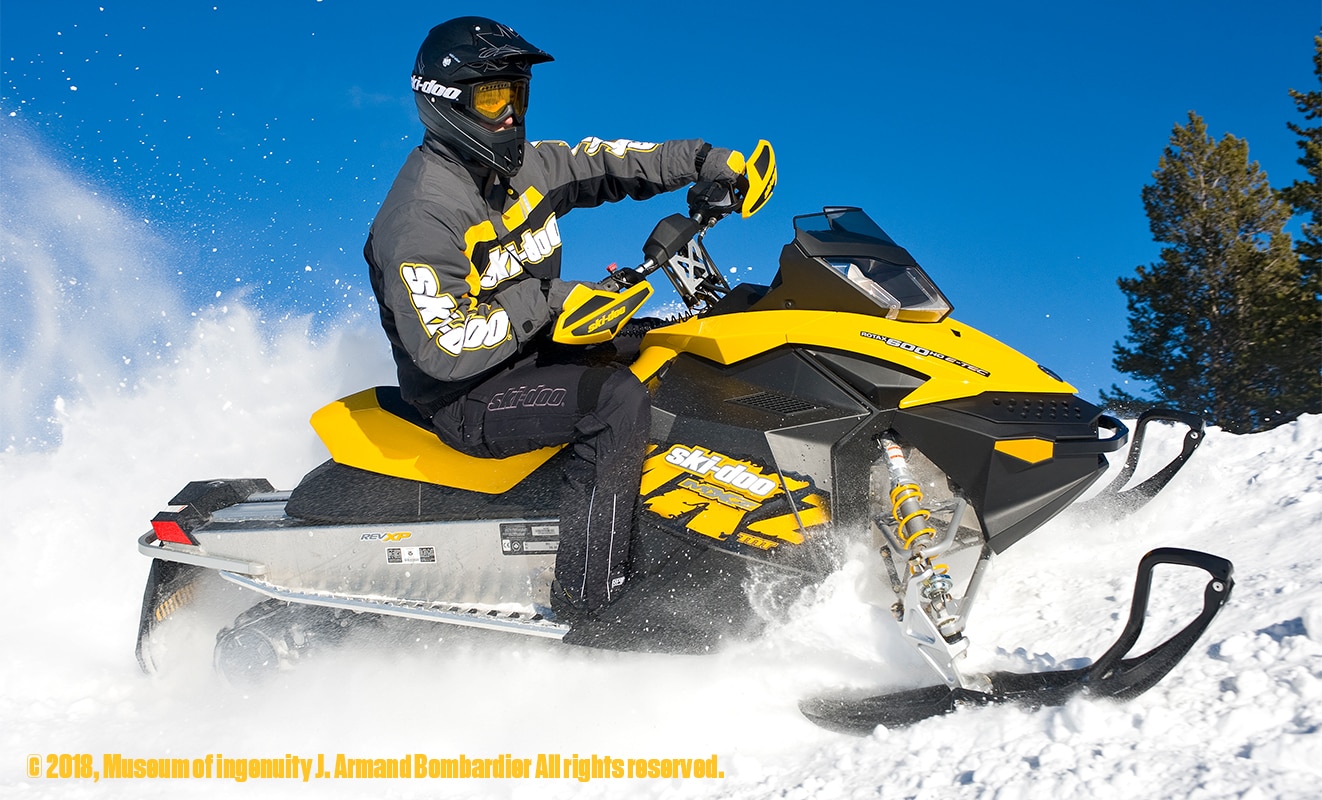 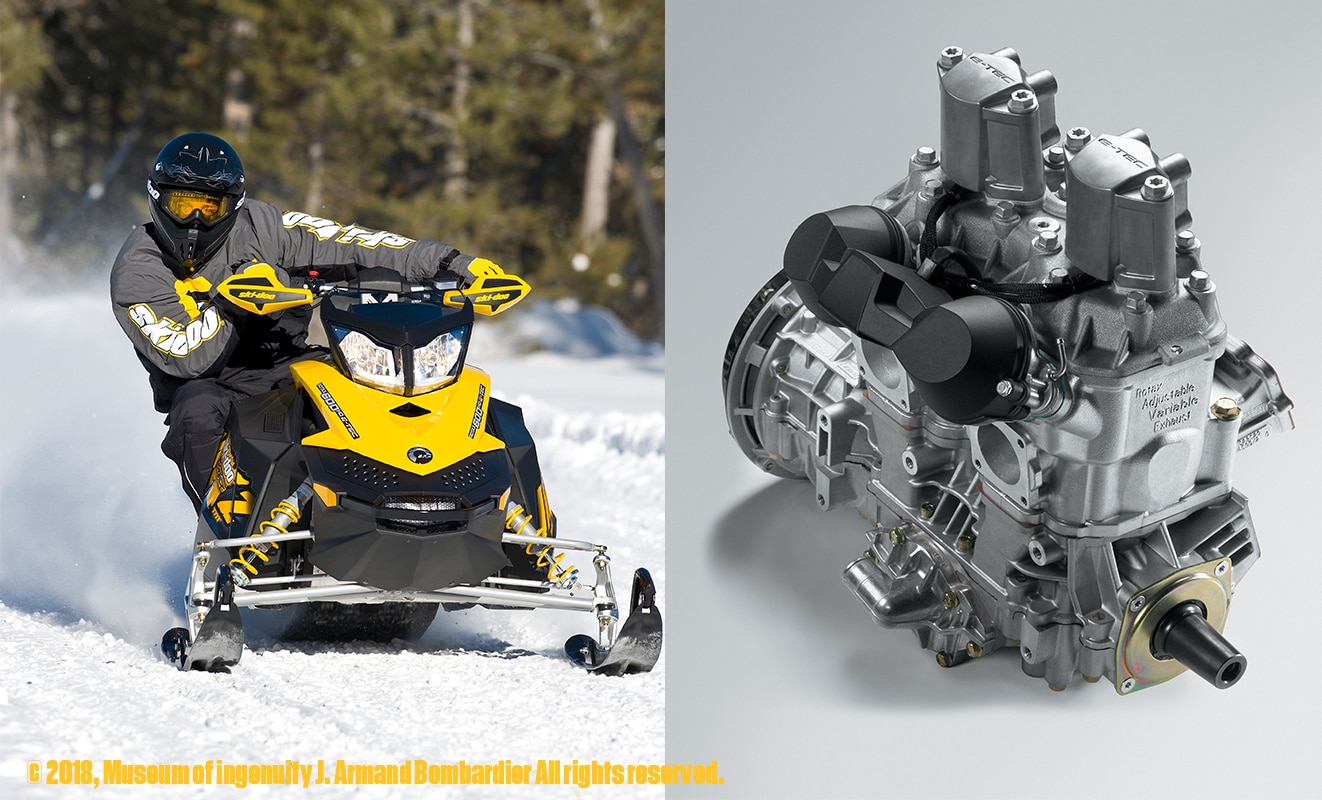 2-Strokes on the Brink

With 2-stroke engines on the verge of extinction thanks to new EPA regulations in the early 1990s, other OEMs and media in nearly all motorized recreation industries were preaching the gospel of the 4-stroke engine as the wave of the future – the only wave. However, there were certain high-performance characteristics a 4-stroke engine simply could not match, such as the unbeatable power-to-weight ratio, torque, and quick revving power delivery. And those characteristics were of paramount importance to certain consumer groups: in particular snowmobilers - especially mountain riders - and boaters.

E-TEC technology as we know it today started on the water with Evinrude outboard engines. While the stricter EPA regulations were absolutely a primary factor in E-TEC’s development, the concept of direct fuel injection for 2-stroke engines has been experimented with since as early as the 1940s. The EPA regulations simply turned the experimentation into a must-have if recreational 2-stroke engines were going to survive.

Having two market segments so heavily interested in the benefits of recreational 2-stroke engines made the investment in overcoming the EPA mandates worthwhile in the eyes of both OMC and BRP along with select few other engine makers. However, underachieving performance and reliability issues plagued many of those early efforts, and fueled the growing public sentiment that 4-strokes would be the only viable engines going forward.

The talented engineering minds at OMC were hard at work, and tantalizingly close to a breakthrough that would change the perception and viability of 2-stroke engines forever. Unfortunately, those same employees were abruptly gathered one morning in December of 2000, and informed that Outboard Marine Corporation (OMC) was filing for bankruptcy immediately. Even though the door seemed to be closing, that bankruptcy filing was the opening needed to secure the future of 2-stroke engines.

On Dec. 23, 2000, executives from BRP, Inc. arranged an evening meeting with a few knowledgeable, but recently out of work OMC employees. They were inquiring about purchasing some of the assets being liquidated by OMC, and were specifically interested in learning more about the new 2-stroke injection technology OMC engineers had been developing.

One of those employees was George Broughton, currently the Director of Product Development at BRP’s Sturtevant, Wis., facility. He picked up an evening phone call that set into motion a chain of events that would change the world of snowmobiling.

“I can remember sitting at home one night deciding which bill not to pay when I answered a phone call,” said Broughton. “The gentleman on the other end of the line said there were some guys from Quebec that wanted to see what we had been working on.”

What Broughton and his fellow engineers had been working on was a potential solution to exceeding EPA emissions standards for 2-stroke engines with a new method of direct injection that could retain the performance and reliability characteristics consumers desired.

“I said OK, and headed down to the plant with a few of my other unemployed colleagues to show them,” he continued. “Little did we know at the time, but that evening we were selling Evinrude to BRP.” 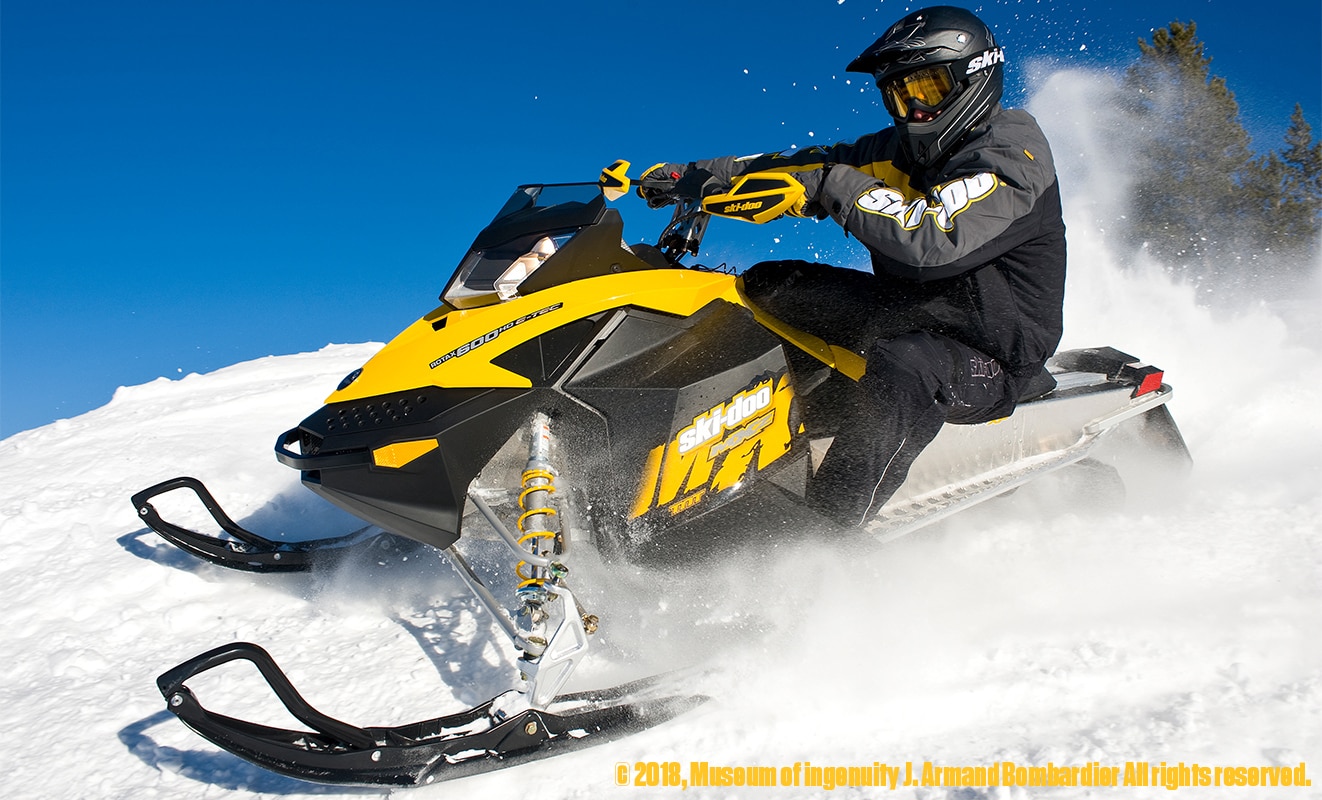 Soon after that fateful December night, it was full speed ahead for Evinrude and the continued development of a new direct injection 2-stroke technology. By March of 2001 – just three short months later – many of the hardworking OMC employees were back to work in a brand new facility with new resources from BRP and Rotax joining forces in a quest for what would become E-TEC direct injection technology.

While the basic principles of the direct injection process were well vetted by OMC, it would take nearly two years of refinement with BRP engineers to bring the durability, quality and reliability up the company’s lofty standards for consumer marketing. Once confident the product would meet the demands of consumers, this new technology was re-launched as E-TEC Direct Injection Technology. Interestingly, the name E-TEC is not an acronym for anything. It’s simply the name chosen for this revolutionary method of 2-stroke direct fuel injection.

“It was never a given that E-TEC development was going to get the green light,” said Broughton. “I can remember sitting in the meeting and being asked point blank by our VP of Sales, ‘Will this make California 3-star emissions [requirement]?’”

“Another engineer seated beside me said, ‘No problem!’” explained Broughton. “Of course, we had no idea how we were going to do that, but through a lot of hard work by some very talented people we got there.”

Got there, they did – and then some. BRP’s acquisition of the Evinrude brand did what possibly no other company in the world could do at the time in bringing together the resources of three companies with such a high pedigree of recreational powersports engineering (BRP, Rotax, OMC). It allowed for the refinement of E-TEC technology at an astonishingly rapid pace, and the adaptation to multiple product lines that far exceeded expectations – including the EPA’s.

What started at OMC as the development of the cleanest injection technology while keeping the unbeatable power-to-weight ratio of a 2-stroke engine, has been continually perfected since the company’s acquisition by BRP. In 2005 Evinrude E-TEC engines became the first outboard engine to receive the EPA’s Clean Air Excellence Award. E-TEC engines are also the only 2-stroke engines certified to operate in some of the most highly regulated recreational areas around the world – something even many 4-stroke engines are unable to achieve.

In talking with Broughton, it’s abundantly apparent one of the challenges he’s most proud of overcoming is not mechanical, but cultural.

“What people don’t realize is one of the biggest hurdles we had to clear was the combination of three distinctly different cultures all working on the same project – Evinrude in the U.S., BRP in Quebec, and Rotax in Austria,” said Broughton. “I’d even call it three and a half when you consider the difference between U.S. Midwest and U.S. Western markets. We all had our quirks, but that’s usually what kept it interesting, in my opinion,” he added. Even though the debut of the outboard E-TEC and snowmobile E-TEC engines were several years apart, they were both in development at the same time.

“The first BRP E-TEC snowmobile was built in 2002,” said Broughton, “I can remember driving it around a parking lot in Waukegan, Ill., with wheels in place of skis.”

There were just more obstacles to overcome on the snow than in the water. The throttle input from the user is completely different. On a boat you push a throttle lever forward to accelerate and slowly pull it back when you get the speed you want, maxing out at around 6000 RPM. On a snowmobile, riders are constantly on and off the throttle whacking it wide open and want instant acceleration near 8000 RPM. Plus you have cold starting in the winter, and it had to be capable of rope starting.

Engine operation at such high revs means the fuel-oil mixture must be delivered much quicker. The genius behind Ski-Doo E-TEC direct injection technology is the use of a voice coil injector, and the ECU’s ability compute the delivery of the fuel-oil mixture to the pistons at much faster speed and in more precise amounts.

The result to an E-TEC owner is not just about keeping the core advantages of 2-stroke performance like instant throttle response, torque, and power-to-weight ratio. The invention of E-TEC technology combined with the advanced engine development from Rotax led to an overall improvement of the total ownership experience. Nearly every aspect of owning a 2-stroke engine got better thanks to E-TEC, from easier pull starts, to vastly improved fuel and oil economy, to an auto-summerization process that preps your sled for long-term storage at the push of a button.

E-TEC engines continue to be well ahead of strict EPA emission standards producing less carbon emissions than many of the leading 4-strokes on the market. Today’s E-TEC engines produce up to 75% less hydrocarbon, nitrogen oxide, and carbon monoxide emissions than the competition. There’s less smoke and exhaust smell. Serviceability is more efficient (read: less expensive) because all E-TEC engines are serviced in virtually the same manner.

The simple act of starting a Rotax E-TEC 2-stroke alone is an enormous, yet often overlooked, benefit. Rotax E-TEC engines only require a one-third-turn of the crankshaft to start. A huge benefit when pull starting, but a gigantic advantage when you consider that third-turn start is a major reason incorporating something like the SHOT engine starting system was even a realistic possibility.

WHAT’S NEXT FOR E-TEC?

In the world of powersports recreation, we’re always looking for more power, better economy, a better all-around vehicle ownership experience. The DNA ingrained in us at BRP is to believe where others see challenges, we see opportunities.

The uniting of BRP, Rotax and Evinrude under the same banner has brought together nearly two centuries of engine building expertise. It not only speaks to the knowhow of our engineering teams, but also the diversity of that knowhow. And if anything, BRP Rotax E-TEC engines show what great collaboration of those assets is capable of. It’s been 10 years since E-TEC technology reinvented 2-stroke snowmobiles, and still no other snowmobile OEM has developed the technology for true direct fuel injection, or duplicate the high-end performance of Rotax E-TEC engines with the same eco-friendly efficiencies.

There will be more development coming, although we can’t say what or when. Today we have better tools, more powerful computers and processors, and we understand what we’re looking at far better than we did just 10 years ago.

As Broughton puts it, “The goodness isn’t all wrung out of the grapes just yet.”